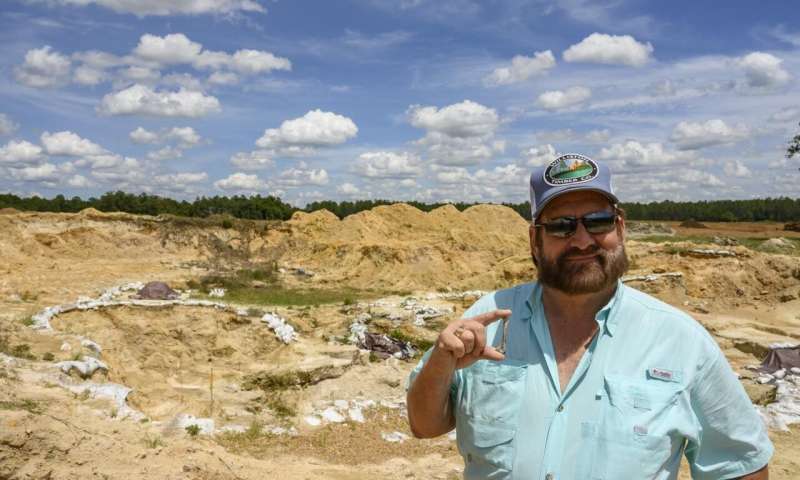 When the bones of an ancient heron were unearthed at a North Florida fossil site, the find wasn't made by researchers but by two Florida Museum of Natural History volunteers.

A previously unknown genus and species, the heron has been named Taphophoyx hodgei (TAFF'-oh-foy-ks HAHJ'-ee-eye) in honor of landowner Eddie Hodge, who has allowed Florida Museum researchers and volunteers to excavate the site on his property near Williston since his granddaughter first discovered fossils there in 2015.

"You couldn't have a better group of people," Hodge said. "There's a lot of negativity when we get home and turn on the television, but it does you good to be out here seeing volunteers get excited and be positive about something."

The bones used to identify the new heron were found by volunteers Toni-Ann Benjamin and Sharon Shears.

Taphophoyx hodgei - whose genus name means "buried heron" in Greek and Latin—is the first new species to be described from Montbrook. Many other new species from the fossil-rich site await publication.

"It's invigorated the local fossil community," said David Steadman, Florida Museum curator of ornithology and lead author of the description of T. hodgei. "One of the greatest values of Montbrook is that it's been such a collaborative learning tool."

Because Montbrook is such an intensively worked fossil site, processing the finds takes the teamwork of scientists and amateurs. Hodge oversees much of the land management that Montbrook requires, including moving dirt and managing drainage. In addition to working outdoors at the site, volunteers prepare and catalog specimens in the Florida Museum's vertebrate paleontology lab.

A good day of digging requires between 10 and 20 days to process in the lab, said Jonathan Bloch, Florida Museum curator of vertebrate paleontology and a coordinator of the fossil dig.

"We simply couldn't do all this work without help from the public," Bloch said. "Volunteers are not only the backbone of the dig, they're actively contributing to scientific discoveries."

Steadman and then-master's student Oona Takano used the characteristics of the bird's scapula and coracoid, two bones that intersect to support the bird's shoulder, to determine the relationship between this ancient heron and modern lineages.

They believe T. hodgei is most closely related to today's tiger-herons, which live in Mexico and Central and South America. They have given the new species the common name "Hodge's tiger-heron."

"This heron adds to this big suite of aquatic birds we're finding at Montbrook," Steadman said. "We're seeing the same families of birds you'd see around wetlands today, but they're all extinct species. The fun challenge is finding out how closely related any given species at Montbrook is to the birds that we see flying and swimming around Florida today. Even after three and a half years, we're nowhere near diminishing returns."

Takano, now a University of New Mexico Ph.D. student, said that bird fossils are prized finds, particularly at a site like Montbrook where the majority of fossils belong to young gomphotheres, extinct elephant-like mammals.

"In general, bird bones don't fossilize well because they're hollow," she said. "It's relatively rare to find well-preserved bird bones at all and even rarer to find articulated bones," referring to bones that would have locked together in the bird's body.

Most Florida fossil sites are limestone sinkholes or pitfall traps created by ancient predators to capture their prey. At Montbrook, researchers have been able to glimpse a different type of ancient environment: the riverine ecosystem. Five million years ago, T. hodgei would have lived alongside saber-toothed cats, rhinoceroses and horses that frequented a river that likely weaved through a grassland, Steadman said.

"Through the kindness of his heart and being interested—just wanting to know what's in the ground on his land—Eddie let us in and one thing led to another." Steadman said. "Naming this heron after Eddie is a minor part of treating him right because he's been treating us right."

"Volunteers are fascinated by this stuff—it's really their passion," Hodge said. "There's a satisfaction in being able to provide something like this for people interested in higher learning, and you don't get the chance to do that very often. You never know what you can find. Just the next little spoonful of dirt, brush it back and there it is."

Tiny Babies of Prehistoric Giant Shrimp Were Ferocious Killers Too

Not only the meter-long adults crawling...

How To Find Dinosaur Fossils

Review: Jurassic World: Fallen Kingdom is Fast Paced but Has a Preposterous Plot and is Ultimately Forgettable

This Fifth instalment in the...

Paleontologists have identified a new genus...

The exquisite preservation of a new, partial...

How Dinosaur Research Can Help Medicine

The intervertebral discs connect the...