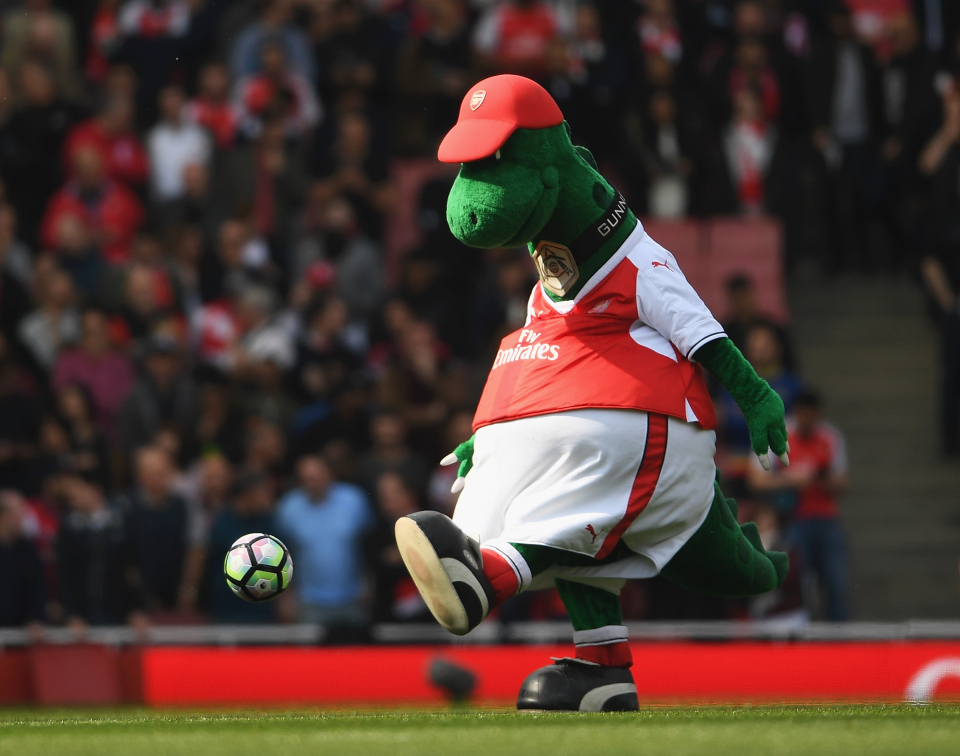 But beloved mascot Gunnersaurus has fallen victim to Arsenal’s cost-cutting.

The dinosaur has been a permanent fixture at home games since 1993, but has been let go as the role is deemed no longer necessary.

An absence of fans at games has impacted revenue on matchdays and Gunnersaurus joins 55 other redundancies in north London.

In August, Arsenal announced the decision to make job cuts as they looked to streamline due to the coronavirus pandemic, but the club insist the mascot will return, according to The Athletic.

Jerry Quy, who played the role of Gunnersauraus, is hugely popular at Arsenal having also been involved in the Junior Gunners and Travel Club.

He has been inside the costume since it was created in 1993 when he made his debut at Highbury in a league game against Manchester City, which the home side won 3-0.

He has stayed true to his role during lockdown, posting a series of ‘Gunnersaurus at home’ posts on social media.

In an update shared with his Twitter followers, Gunnersaurus revealed he had been ironing, gardening, and watching Bargain Hunt after being forced into self-isolation due to Mikel Arteta’s positive COVID test in March.

He wrote: “Hope everyone is well. I’ve been keeping busy. Just enjoyed a spot of gardening this morning.

“I’ll get a few shirts done before Bargain Hunt later.”

Samuel L. Jackson had a small but memorable...

Jurassic World: 10 Best Things To Do At The Theme Park

Teaching kids with the help of dinosaurs

Children love dinosaurs so much they can be...

Modder ‘Stevokenevo’ is currently working on...

Tiny Babies of Prehistoric Giant Shrimp Were Ferocious Killers Too

Not only the meter-long adults crawling...

After last appearing in Joe Johnston's...

A Jurassic Park Alternate Ending Has Been Revealed, And It’s Amazing

Steven Spielberg’s Jurassic Park is a...

A multitude of different manufacturing towns...