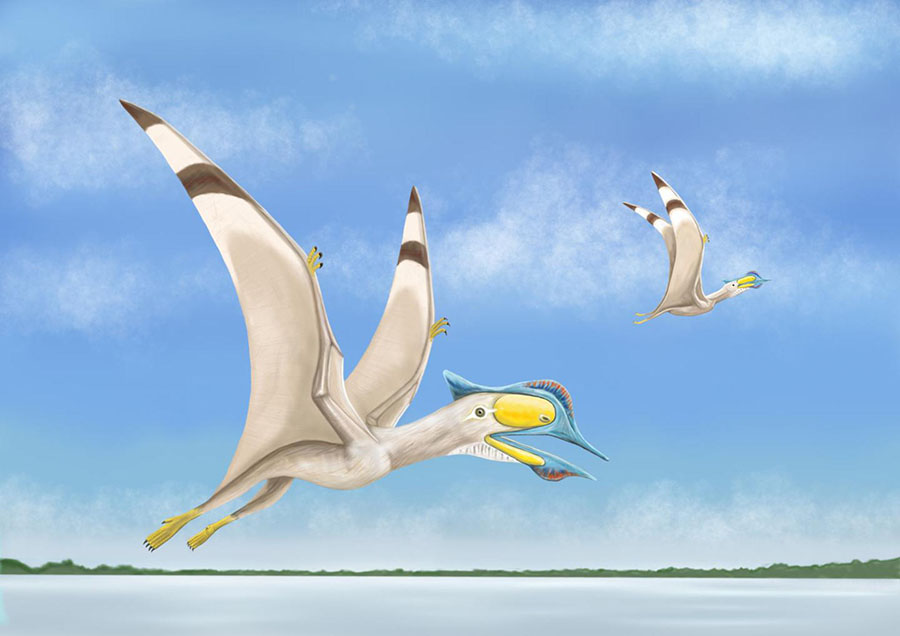 Paleontologists have announced the discovery of a new genus and species of tapejarid pterosaur from Errachidia Province of Morocco.

The species belongs to Tapejaridae, a group of small to medium-sized pterosaurs with wingspans perhaps as wide as 4 m.

Most tapejarid pterosaurs had large, broad crests sweeping up from the front of the skull.

They are well known in Brazil, China and Europe, but this is the first unambiguous occurrence of Tapejaridae in Africa.

The fossilized remains of Afrotapejara zouhrii were acquired by a commercial fossil trader based in the town of Erfoud who sources fossils from several localities in the Tafilalt region of southern Morocco.

The specimen — a single portion of jaw — was collected from a series of small excavations in the Cretaceous-period Kem Kem beds near a small plateau called Ikhf N’ Taqmout (Takmout).

“I feel very privileged to be part of such an exciting discovery,” said co-author Roy Smith, a Ph.D. student in the School of the Environment, Geography and Geological Sciences at the University of Portsmouth.

“Working in the Sahara was a life-changing experience, and discovering a new species of pterosaur is the icing on the cake.”

“The study of Moroccan material shows that we are still far from having found all the paleontological treasures of North Africa,” said Professor David Martill, a paleontologist in the School of the Environment, Geography and Geological Sciences at the University of Portsmouth.

“Even fragmentary fossils, like the jaw piece of the new pterosaur, can give us important information about the biodiversity of the past.”

The discovery is reported in a paper in the journal Cretaceous Research.

Once Implicated in Cloning Fraud, This Scientist Now Wants to Bring Back an Extinct Ice-Age Horse

The 8 Best Jurassic Park Attractions At Universal Studios Parks, Past and Present

Universal Studios Parks has had quite a few...

Could Dinosaurs Evolve Back Into Existence?

What an interesting question! Well,...

To most people, paleontology is the study of...

A giant fossilized egg of an extinct marine...

Dinosaur paleontology has long been the...

Curious Kids: Why Did The Dinosaurs Die?

We know that dinosaurs ruled the Earth for...