What Happened To Camp Cretaceous' Kids After Jurassic World? Every Theory | Paleontology World

What Happened To Camp Cretaceous' Kids After Jurassic World? Every Theory

Jurassic World: Camp Cretaceous' cliffhanger leaves fans wondering what happens to the kids on Isla Nublar? Here's every theory as to their fate.

Jurassic World: Camp Cretaceous introduced new characters into the Jurassic universe, but by the end of season 1, they're all missing on Isla Nublar, leaving fans wondering what will happen to them. Executive produced by Steven Spielberg, Colin Trevorrow, and Frank Marshall, Jurassic World: Camp Cretaceous is an animated series aimed at younger viewers but it doesn't flinch in showing dinosaur attacks and placing the six teenage heroes in harrowing, life-or-death situations - and one of the kids, Ben (Sean Giambrone), could be dead after falling off of the monorail.

Set during the events of 2015's Jurassic World, Camp Cretaceous tells the heretofore unknown story of Darius (Paul-Mikel Williams), Brooklynn (Jenna Ortega), Kenji (Ryan Potter), Yasmina (Kausar Mohammad), Sammy (Raini Rodriguez), and Ben, the inaugural group of campers who got to have a behind-the-scenes Jurassic World experience. Unfortunately, their dream vacation turned into a nightmare when the Indominus Rex got loose and led to the evacuation and destruction of the theme park resort, as seen in the film. The campers tried to make it to the southern docks of the island to join the evacuation but they were ultimately too late and were left behind - trapped all alone on an island of killer dinosaurs.

The kids' predicament is known to at least two adults, their camp counselors Roxie (Jameela Jamil) and Dave (Glen Powell), but until a rescue mission can be mounted, the campers have to rely on each other to survive on Isla Nublar. This isn't a new scenario for the Jurassic films, however; Jurassic Park III showed that one teenager, Eric Kirby (Trevor Morgan), was able to survive alone on Isla Sorna AKA Site B for eight weeks. Not only are the campers in a group, and they have Darius, who is a dinosaur expert, and Kenji, who knows the VIP access points of Jurassic World, but the island resort has a lot of resources, food, and shelter, to help them survive - if the campers can make it to the main park without being eaten.

Jurassic World: Camp Cretaceous season 2 will pick up the story of the missing campers and whether or not they can be rescued, but until then, fans can only speculate what will happen to them. Here are the scenarios the Camp Cretaceous teens face, which grow increasingly grim the longer they are lost on Jurassic World.

The Kids Are Rescued In Jurassic World: Camp Cretaceous Season 2

The most likely possibility is that Jurassic World: Camp Cretaceous season 2 depicts a rescue mission to save the kids while they attempt to survive on the island. Camp Counselors Roxie and Dave argued for the last ferry to stay until the kids could board and after it departed, they continued to demand that the boat turn around. Once word gets out that the six members of Camp Cretaceous are still on Isla Nublar, there will very likely be an attempt to rescue them and Roxie and Dave may lead it (so that they can also appear in season 2).

Further, the campers aren't exactly nobodies. Kenji continually bragged that his wealthy father is one of Jurassic World's main investors, so his family would have the resources and the clout to demand a rescue mission. Brooklynn is a famous social influencer so her being trapped in the ruins of Jurassic World would be big news. Yasmina is a well-known teen athlete and Sammy's family supplies all of the beef sent to Isla Nublar, plus she was a spy sent by the rival bioengineering company called Mantah Corp, so they would also like to acquire whatever details she got from InGen and Dr. Henry Wu's (B.D. Wong) laboratory. There are plenty of people with the means to rescue the kids and the campers may not have to be trapped on Isla Nublar for very long.

The Kids Are Rescued When Mercenaries Come To Isla Nublar

In the unlikely event that the kids aren't rescued in Jurassic World: Camp Cretaceous season 2, the next window for them to escape Isla Nublar is in the opening scene of Jurassic World: Fallen Kingdom. Six months after the events of Jurassic World (and Camp Cretaceous), a group of mercenaries arrived at Isla Nublar to extract the DNA of the Indominus Rex from the Mosasaurus' lagoon. Of course, this mission didn't go off without a hitch; one of the mercs is eaten by the Mosasaurus, which then swims out into the open ocean.

If the kids from Camp Cretaceous are still on the island at this point, then boarding the helicopter would be their best means of escape. Just as Camp Cretaceous season 1 retcons Jurassic World, a similar retcon could have the kids be saved by the mercenaries before they escape Isla Nublar. 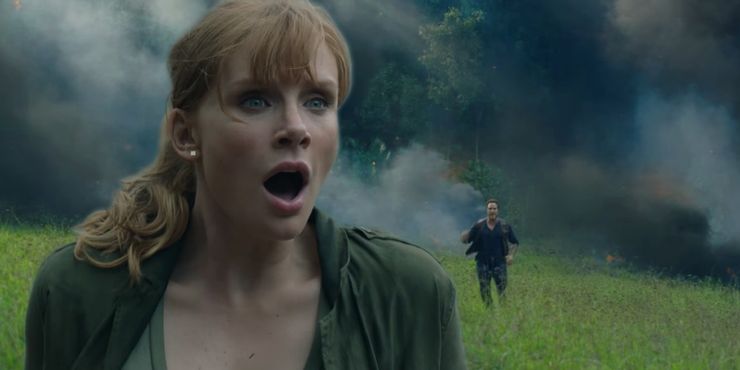 The main story of Jurassic World: Fallen Kingdom takes place on 2018, which means the campers will have been on the island for three years by the time Claire Dearing (Bryce Dallas), Owen Grady (Chris Pratt), and the Dinosaur Protection Group arrive with another team of mercenaries to rescue the dinosaurs. Escape from Isla Nublar is paramount for the campers at this point because Mt. Sibo's eruption is imminent and volcanic lava will destroy the island and kill everything left on it.

The kids escaping the island during the events of Jurassic World: Fallen Kingdom would be a huge retcon: The mercenaries led by Ken Wheatley (Ted Levine) betrayed Grady once they acquired Blue the Velociraptor and the other dinos they needed for Eli Mills' (Rafe Spall) illegal dinosaur auction at Lockwood Manor. Wheatley left Owen, Claire, and the others on Isla Nublar to die but they managed to sneak aboard the mercs' boat and sail back to California undetected. While it's a further stretch if logic, the kids from Camp Cretaceous could also stow away on the boat and get back to America without the mercenaries knowing. In any case, this would be their last opportunity to escape Isla Nublar before the volcano completely destroys it.

The Kids Die On The Island

This would be the worst-case scenario and, frankly, it's far-fetched that a Jurassic World animated series aimed at the young demographic would depict six teenagers dying on Isla Nublar. However, death is a grim possibility the campers themselves have to face until they're rescued. Darius, Brooklynn, Kenji, Yaz, Sammy, and Ben (if he is still alive) are alone on an island filled with man-eating dinosaurs, after all. They were extremely fortunate to survive just long enough to get to the south ferry docks but episodes 4-8 of Jurassic World: Camp Cretaceous only spanned one day of life-threatening scenarios. Surviving long-term on Isla Nublar is a different story entirely.

The harsh reality of staying alive for an indeterminate amount of time on Isla Nublar is daunting, especially for a group of teenagers, one of whom (Yaz) already has an injured leg. Even though they're fortunate that the Indominus Rex is dead (a fact the campers aren't aware of yet at the end of Camp Cretaceous season 1), there are still the T-Rex, the Carnotaurs, Velociraptors, Pteranaodons, and a slew of other man-eating prehistoric animals to deal with. They also have the ticking clock of Mt. Sibo, which will erupt in three years. While it's most likely that the kids of Jurassic World: Camp Cretaceous will be rescued in season 2, which should be well before Isla Nublar's volcanic Armageddon, their chances of surviving in one piece continue to drop the longer they're trapped on Jurassic World.

Fossils Reveal How Ancient Birds Got Their Beaks

A bird that lived alongside dinosaurs may...

Utahraptor Rips Way Through Senate Toward Becoming the State Dinosaur

Separately at least one preserved carcass of...

Giant Ammonites Once Thrived on Both Sides of Atlantic

Heat up those cloning machines! ...

For the past five years, the independent...

The Walking Dead: Fossils on the Move Can Distort Patterns of Mass Extinctions

Using the fossil record to accurately...

A T. Rex and a Shark as Neighbors? Yes, Eons Ago in South Dakota