Fossil Eggshells Suggest All Dinosaurs May Have Been Warm-Blooded 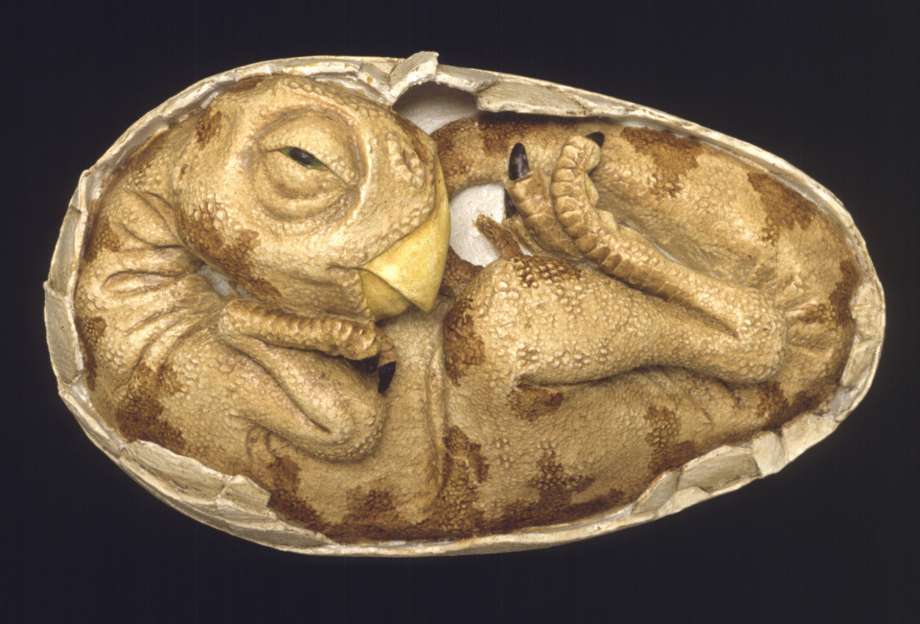 Were all dinosaurs warm-blooded? Were any of them warm-blooded? The question of endothermy has long been, ahem, a hot topic in paleontology. No doubt a new study, using a recently developed method, will fire up the debate.

Unlike cold-blooded ectotherms, endotherms have the ability to regulate their body temperature internally. They generate, conserve and shed heat in response to their environment, making them generally more adaptable to different climates and ecological niches.

Most animals, including reptiles, are ectotherms. Mammals, birds and a handful of fish are either endotherms or evolved some degree of endothermy. Because warm-blooded birds evolved from dinosaurs, and dinosaurs evolved from cold-blooded reptiles, researchers have long sought clues to just where in the reptile-to-bird story things heated up.

From Analog To Isotope

Over the years, researchers have come up with a number of theories about warm-blooded dinosaurs, but they've been based almost entirely on looking at living animals and extrapolating. Comparing the bone structure of some dinosaurs with that of modern birds, for example, suggested that at least some of the extinct animals may have evolved endothermic abilities.

These kinds of comparisons can be problematic, however, because they're based on the assumption that dinosaurs lived, breathed and grew the same way modern animals do.

More recently, researchers have been looking for dinosaur endothermy with a method called carbonate clumped isotope paleothermometry. Paleothermometry itself is nothing new; it's been around for decades as a way to model ancient ocean temperatures, climates and other environmental patterns using proxies.

For example: The density of the cells that form a tree's annual growth ring varies based on the ambient temperature and humidity of the tree's environment. Researchers have used these subtle changes to reconstruct ancient climate patterns.

Carbonate clumped isotope paleothermometry zeroes in on, yes, carbonates. Living things are one of the many sources of these chemical compounds, and tooth enamel and eggshells in particular are full of them. The exact composition and structure of the carbonate varies based on the temperature at the time it formed. By analyzing this variation, researchers are able to determine what the body temperature of the animal was.

The paleothermometry method was previously used to estimate body temperature for species in two of the major groups of dinosaurs: sauropods (the often-enormous, four-legged, long-necked plant-eaters) and theropods (the bipedal, generally carnivorous dinosaurs, including the lineage that eventually gave rise to birds).

These previous studies suggested that the animals had body temperatures of about 32-38 degrees Celsius (about 90-100 degrees Fahrenheit), which put them in the range of modern endotherms.

There were some questions about the dinosaur specimens used, however, because they were collected from sites that, back in the Mesozoic, would have been in the low to mid-latitudes. Seasonal temperatures in these locations may have reached 100 degrees or more, potentially skewing the paleothermometry data.

For example, a separate study using the method sampled eggshells from cold-blooded animals — bearded lizards and tortoises — living at the Los Angeles Zoo. The samples fell into the range of living endotherms because of the warm environment.

To avoid this problem, most of the samples in the new study came from dinosaur eggshells found in Alberta, Canada, which would have had cooler ambient temperatures. Therefore any higher paleothermometry readings would be a strong indicator of endothermy.

One of the species sampled, Maiasaura peeblesorum, is the first ornithischian dinosaur to be tested using this method. Ornithischians were the first major lineage of dinosaurs to split off onto their own branch, making them, of all dinosaurs, the most distant relatives of modern birds.

Including an ornithischian in the study is significant because of their evolutionary distance to birds, but also because it means all three major groups of dinosaurs have now been analyzed using this method of paleothermometry.

Another species in the study, the theropod Troodon formosus, is more closely related to the lineage that evolved into birds. The third sample came from eggshells collected in Romania and tentatively assigned to a sauropod, Magyarosaurus.

The researchers also tested eggshells from modern birds including emus, chickens, hummingbirds, sparrows and wrens. They included previously-collected body temperature information about alligators, mollusks and other ectotherms in their analysis.

The study's results: All of the dinosaur material tested fell within the range of modern endotherms. The Maiasaurus sample in particular, say the authors, tested within the range of modern birds at about 44 degrees Celsius (about 111 degrees Fahrenheit). Finding evidence of warm-bloodedness in all major groups of dinosaur suggests that endothermy was an ancestral trait that evolved earlier in the archosaur lineage.

But wait, there's a twist: The research uncovered something interesting about Troodon. One sample tested at about 38 degrees Celsius (100 degrees Fahreneheit). However, the other two samples, from two different sites, had significantly cooler body temps of around 27-28 degrees Celsius (80-82 degrees Fahrenheit). The lower Troodon temps matched those of fossil mollusks from the same deposits — because mollusks are ectotherms and cannot self-regulate their heat, the temperature in which their shells formed is considered a proxy for the environment's ambient temperature.

The researchers' analysis suggests that the cooler Troodon samples may be evidence of heterothermy in the dinosaurs.

Heterothermic animals have evolved the ability to essentially switch off their endothermy and become more ectothermic to conserve energy. Heterothermy typically turns up in smaller birds and mammals that have periods of high activity and extreme energy expenditure. To recoup their losses, so to speak, they may drop their body temperatures and become inactive during short daily periods of torpor, or longer stretches of hibernation.

The too-cool Troodons may, say the authors, be a hint that at least some dinosaurs were heterothermic.

The research appears in Science Advances.

Let's look at how the sinister threats of...

A new genus and species of probainognathian...

How To Get Google 3D Animals To See Dinosaurs On Android & iPhone?

Feeling a little stressed out due to the...

Paleontologists believe that all non-avian...