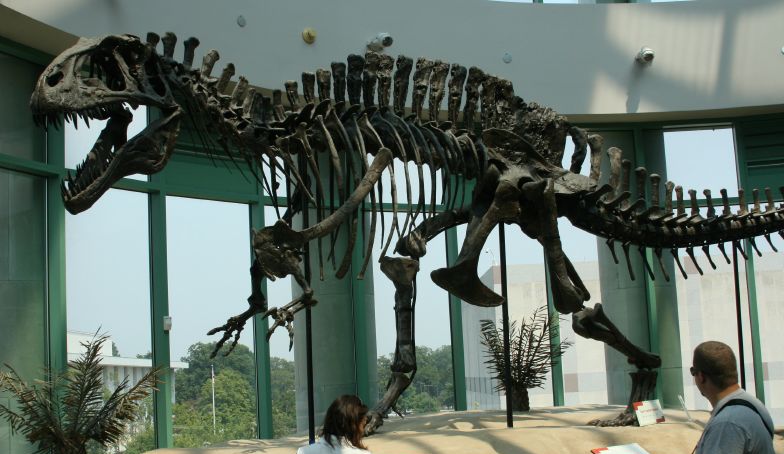 Acrocanthosaurus (meaning “high-spined lizard”) is a genus of theropod dinosaur that existed in what is now North America during the Aptian and early Albian stages of the Early Cretaceous. Like most dinosaur genera, Acrocanthosaurus contains only a single species, A. atokensis. Its fossil remains are found mainly in the U.S. states of Oklahoma, Texas, and Wyoming, although teeth attributed to Acrocanthosaurus have been found as far east as Maryland.

Acrocanthosaurus was a bipedal predator. As the name suggests, it is best known for the high neural spines on many of its vertebrae, which most likely supported a ridge of muscle over the animal’s neck, back and hips. Acrocanthosaurus was one of the largest theropods, reaching 11.5 m (38 ft) in length, and weighing up to 6.2 tonnes (6.8 short tons). Large theropod footprints discovered in Texas may have been made by Acrocanthosaurus, although there is no direct association with skeletal remains.

Recent discoveries have elucidated many details of its anatomy, allowing for specialized studies focusing on its brain structure and forelimb function. Acrocanthosaurus was the largest theropod in its ecosystem and likely an apex predator which preyed on sauropods, ornithopods, and ankylosaurs.

The skull of Acrocanthosaurus featured large fenestra,‭ ‬a necessary adaptation to reduce the weight of its huge skull that could approach up to a‭ ‬one hundred and thirty‭ centi‬meters long.‭ ‬The teeth of Acrocanthosaurus were curved and serrated like other members of the carcharodontosaurid group.‭ ‬The maxilla and premaxilla contained‭ ‬a total of around thirty-eight teeth.‭ ‬The teeth in the lower jaw are generally smaller than those above and can approach up to thirty in number.‭ ‬Another carcharodontosaurid trait is the bony brow ridge above the eye,‭ ‬formed by the lacrimal and postorbital bones coming together. 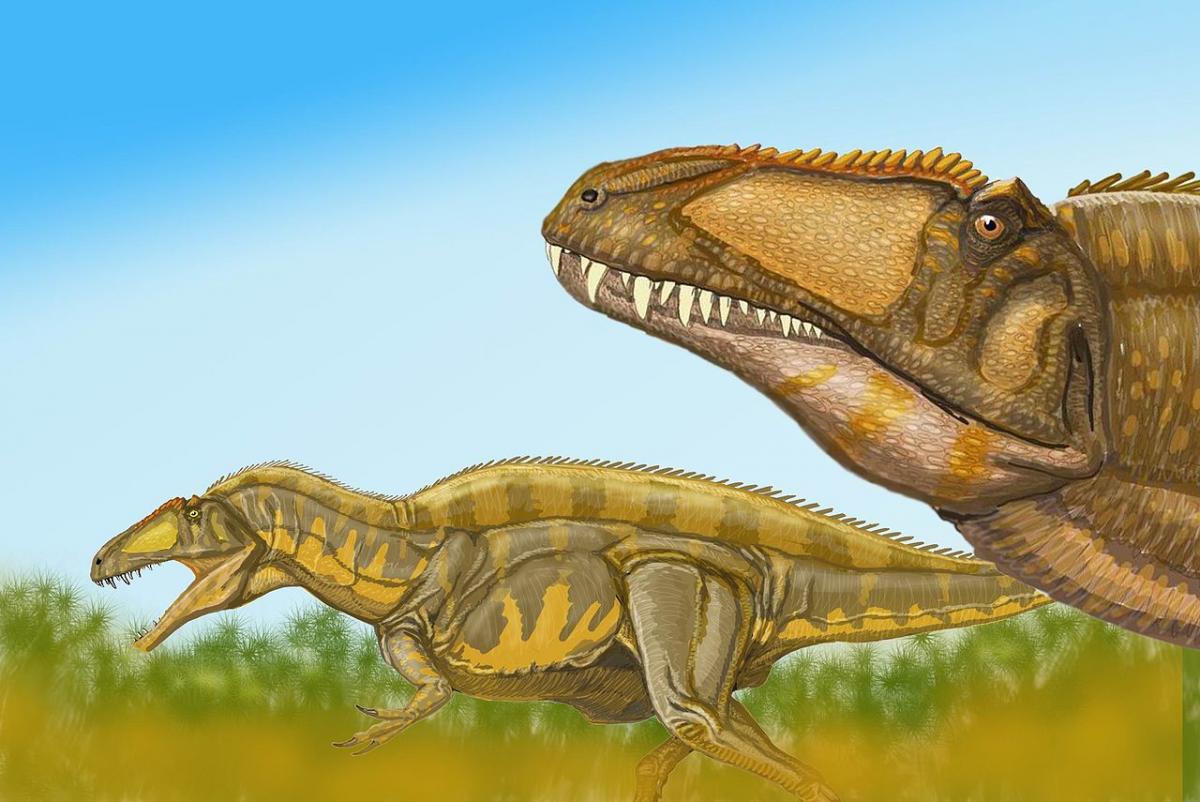 Computer reconstruction of the inner ear has shown that the‭ ‘‬resting position‭’ ‬of the head of Acrocanthosaurus was twenty-five degrees below zero horizontal.‭ ‬This may give the impression that Acrocanthosaurus usually walked around looking slightly towards the ground.

Reconstruction of an Acrocanthosaurus forelimb suggests that there would have been large amounts of cartilage between the bones.‭ ‬This comes from the fact that bones themselves do not make perfect joints and would need the extra cartilage in order to articulate properly.‭ ‬The arms of Acrocanthosaurus did not have a huge range of motions.‭ ‬The arm could not fully extend and could only manage limited flexing.‭ ‬The humerus could retract back quite away,‭ ‬as if Acrocanthosaurus was pulling something towards its chest.‭ ‬As is commonly seen in larger theropods,‭ ‬the fore arm could not twist like a human arm can.‭ ‬When at rest the arms would have faced medially inwards,‭ ‬like when you clap your hands together.‭ ‬Acrocanthosaurus had three digits on the end of its arms with the first and second claws probably being permanently flexed.‭ ‬The third and smallest claw may have been able to retract as well.

One usual feature of Acrocanthosaurus is the large neural spines on the vertebrae of the neck, back, hips and upper tail. It is not thought that it had a sail on its back like Spinosaurus (which was unrelated, and had much larger neural spines), but rather it is thought the spines had attachments for powerful muscles, similar to those found in modern bison. Its not entirely clear what the purpose of these spines and muscles were – possibilities include fat storage, communication, or temperature regulation.

Phorusrhacids, colloquially known as terror birds, are an extinct clade of large carnivorous flightless birds that were the largest species of apex predators in South America during the Cenozoic Era; their conventionally accepted temporal range covers from 62 to 1.8 million years (Ma) ago.

They ranged in height from 1–3 m (3 ft 3 in–9 ft 10 in) tall. Their closest modern-day relatives are believed to be the 80-centimetre-tall (31 in) seriemas. Titanis walleri, one of the larger species, is known from Texas and Florida in North America. This makes the phorusrhacids the only known large South American predator to migrate north in the Great American Interchange that followed the formation of the Isthmus of Panama land bridge (the main pulse of the interchange began about 2.6 Ma ago; Titanis at 5 Ma was an early northward migrant).

It was once believed that T. walleri became extinct in North America around the time of the arrival of humans, but subsequent datings of Titanis fossils provided no evidence for their survival after 1.8 Ma. However, reports from Uruguay of new findings of a relatively small form (Psilopterus) dating to 18,000 and 96,000 years ago would imply that phorusrhacids survived there until very recently (i.e., until the late Pleistocene); the initial report of such a recent date has been questioned.

Phorusrhacids may have even made their way into Africa; the genus Lavocatavis was recently discovered in Algeria, but its status as a true phorusrhacid is questioned. A possible European form, Eleutherornis, has also been identified, suggesting that this group had a wider geographical range in the Paleogene.

The closely related bathornithids occupied a similar ecological niche in North America across the Eocene to Early Miocene; some, like Paracrax, were similar in size to the largest phorusrhacids. At least one analysis recovers Bathornis as sister taxa to phorusrhacids, on the basis of shared features in the jaws and coracoid, though this has been seriously contested, as these might have evolved independently for the same carnivorous, flightless lifestyle.

Most phorusrhacids were very fast runners. All members possessed a large, sharp beak, a powerful neck and sharp talons. However, even with these attributes, the phorusrhacids are often assumed to have preyed on relatively small animals (about the size of a rabbit) that could be dispatched with a minimum of struggle. This is due to the fact that with the phorusrhacids' beak proportions, the jaw could not generate a great deal of bite force with which to kill the prey. This is disputable as many big-game hunting predators such as Smilodon, great white sharks and Allosaurus have weaker bite forces and often laterally weak skulls as adaptations towards, not away from, killing large prey, relying instead on the presence of a cutting edge, a wide gape made possible by the reduction of jaw musculature, and the driving force of the body or neck. Since phorusrhacids share many of the same adaptations, such as a large, laterally flattened skull with a sharp-edged beak and powerful neck musculature, it is possible that they were specialized predators of relatively large prey.

The bones of the beak were tightly fused together, making the beak more resilient to force from the front to back direction, thus suggesting that it could cause a great amount of harm through pecking as opposed to side-to-side head movements like shaking prey. Generally speaking, it is thought that a terror bird would use its feet to injure prey by kicking it, and to hold the prey down and dispatch by pecking at it with its large beak. Larger prey may also have been attacked by pecking and kicking, or by using the beak as a blade to strike at or slash vital organs.

It has been recently shown that at least some phorusrhacids like Andalgalornis, while very fast runners in a straight line, were poor at tight turns at speed, which contradicts the idea of phorusrhacids being agile predators of small prey.

All phorusrhacids are thought to have been carnivorous. The strong downwards curve from the tip of this beak suggests that it ripped the flesh from the body of other animals. Many extant bird species with this feature are carnivorous. CT scans performed on the skull of a phorusrhacid reveal that the species would not have been able to shake its prey side to side, but rather exert significant downward force. Florentino Ameghino claimed in a letter to Édouard Trouessart that he had specimens from Argentina of "petrified masses preserving skeletons of large rodents, Protypotheridae [small notoungulates] and even Proterotheriidae [deer-sized litopterns], with all their bones crushed and corroded, piled on with no apparent order and forming a nearly spherical mass with the skull in the center" that resembled giant owl pellets, suggesting that phorusrhacids may have swallowed their prey whole and regurgitated the indigestible parts similar to owls. However, Ameghino never formally described these specimens and they have not yet been relocated, making it difficult to determine if they are phorusrhacid pellets. Fossilized pellets from northwestern Argentina have also been suggested to pertain to small phorusrhacids like Procariama.

There were some suggestions that phorusracids, like the majority of Pleistocene megafauna, were killed off by human activity such as hunting or habitat change. This idea is no longer considered valid, as improved dating on Titanis specimens show that the last phorusracids went extinct over one million years before humans arrived. However, several fossil finds of smaller forms have been described from the late Pleistocene of South America. Psilopterus may have been present until 96,040 ± 6,300 years ago. Another unidentified smaller type has also been dated to the late Pleistocene, perhaps 18,000 years ago. These finds, if accepted, extend the existence of the smaller members of this group of avian predators considerably.

Following the revision by Alvarenga and Höfling (2003), there are now 5 subfamilies, containing 14 genera and 18 species: These species were the product of adaptive radiation.

Alvarenga and Höfling did not include the Ameghinornithidae from Europe in the phorusrhacoids; these have meanwhile turned out to be more basal members of Cariamae. Though traditionally considered as members of the Gruiformes, based on both morphological and genetic studies (the latter being based on the seriema) Cariamiformes may belong to a separate group of birds, Australaves, and their closest living relatives, according to nuclear sequence studies, are a clade consisting of Falconidae, Psittaciformes and Passeriformes.

The History Of Paleontology

What Really Killed the Dinosaurs? Not Asteroids, According to a Princeton Scientist

The last of the non-avian dinosaurs...

Around 90 million years ago, eastern and...

Will Sam Neill Ever Return To Jurassic Park Franchise?

If three important moments in ...

Jurassic World 3: What Dominion Needs To Do To End The Trilogy